“The best place to find God is in a garden. You can dig for him there.”

My earliest fondest memories of a garden are from some twenty years ago.

This garden, next to a nondescript one-bedroom house in a College staff quarters, was the result of its owner’s relentless hard work, proudly ramped up the aesthetic quotient of its otherwise grey surroundings, and ultimately came to be the neighbour’s pride. Maintaining the garden wasn’t easy, but in fact, painstaking work. Just the act of watering all the plants and trees each day would take at least an hour. In-depth knowledge of the individual growing patterns, flowering seasons, watering and manuring needs were critical and required thorough planning and thought. It needed extensive care and hands-on maintenance that was not just time-consuming but also required the owners, my parents, to be vigilant and attentive.

From protecting the plants from the usual problems that come with growing them to making sure trespassers did not trample the tender saplings or pluck the attractive roses. Fortunately, we weren’t alone in guarding our lawn. Neighbours, college staff, and even regular visitors had assumed the responsibility of keeping a watch over the garden that was rewarding them with a soothing fragrance in the cool nights and welcome shade during the hot summer days.

Often we would spot strangers strolling in our garden. On enquiring, they would apologetically smile and explain how they couldn’t resist its charm. We would warn them not to pluck the roses or walk in the flower beds. They would smile and nod their assurance and we would let them be.

Indeed, the garden was just ours anymore. Inhabitants of ten apartments in two buildings could proudly lay claim to it. From picnic lunches on wintry Sunday afternoons to evening strolls in the summer, from make-shift camping sites to venues for doll marriages, and even community holi celebrations – the garden willingly served us all.

The fruits of labour were bountiful too. The flowers, the plants, and the trees amply rewarded all those who showered it with love and affection. The tall, stately mango tree that stood guard at the entrance blessed us with baskets and baskets of mangoes that were distributed among all the residents and staff. Gigantic-sized roses spread a heavenly fragrance all around. Lush plum and lemon trees rewarded us with juicy fruits that were plucked fresh from the trees. The fence that was the thick grape vine was a fragrant curtain of purple flowers – a sight for sore eyes for everyone who had stopped to admire its splendour.

When we moved out of the staff quarters (and into what is now our previous home), I was dejected. At the new place, I would have a room of my own, I knew. I would have lots of friends, and huge lawns to play with them in. And yet, it wasn’t enough to cheer me up. The garden I was leaving behind had been, for a very long time, my escape from reality. It was that happy place where I was content and no one or nothing else mattered. And I’d soon be parted from it forever. I cried at leaving behind those trees under whose shade I used to read a book; at leaving behind the lush green grass upon which I used to walk in the evenings; those roses with which my dad and I would playfully compare my height were being abandoned like orphans. No longer would I spend lazy afternoons and energetic evenings in their company.

I hadn’t put in a day’s work in that garden; only reaped its benefits and yet, I couldn’t have been more morose as I was that day. Morose and helpless, for we couldn’t possibly have a garden in the new house.

The only consolation was that the family that was to move into the vacated house and ‘inherit’ the garden promised to ‘take care of it’. It is a different matter that in less than a month the garden was in utter shambles. Despite no knowledge of gardening, in a foolhardy overzealous attempt to further develop the garden, the new occupants ended up overplanting it.

Roses competed with marigolds for air, food, and water. The grass – overwalked and undernourished – dried up and ultimately died. When I visited them again, I was heart-broken to see my beloved garden in its state of utter neglect and disregard. It had seen some glorious days, I comforted myself.

In the fifteen-plus years that we spent in the new house, I was desperate to have some semblance of a garden.  Unfortunately, the lack of space, time, and efforts were a huge deterrent. Every nursery I passed by, every garden I laid my eyes on would revive the urge to have a garden like the one I loved and lost. Someday, I would tell myself with a sense of nostalgia.

And soon, the dream came true. We moved again. This time, I had my heart set on having a spot of green in some part of the house. That I had ample time on my hands and a small balcony attached to my room was a huge bonus.

Within a month of moving into our current house, I’ve been able to create what I call a ‘mini-garden’, even though it is just a row of potted plants lined up in the balcony. 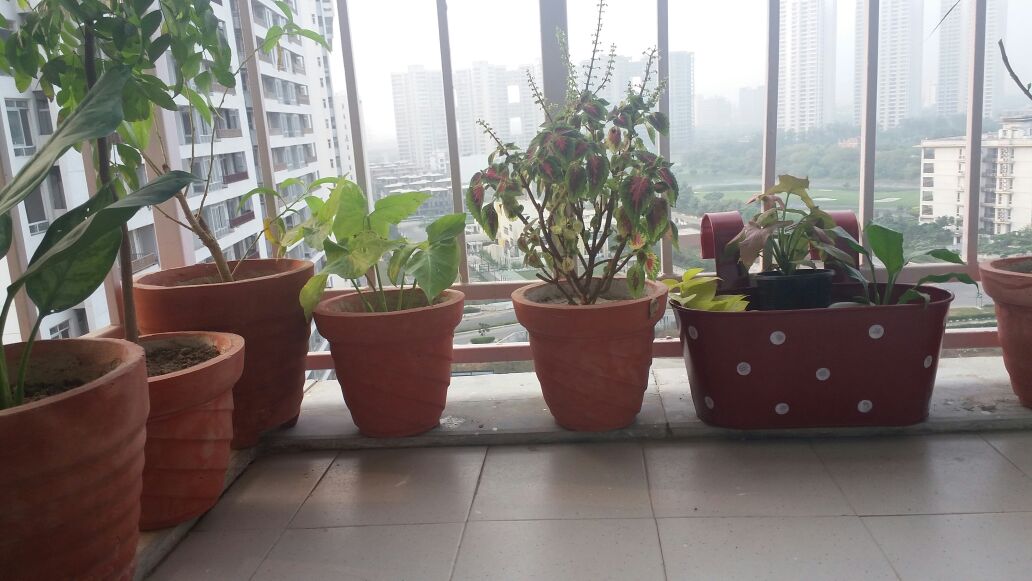 I am excited about connecting with nature and making this small balcony garden my happy place once again.

Writer, Blogger, Trainer, and Author of Just Another Day (amzn.in/hOIaKxf) and Dashavatar-Stories of Lord Vishnu (https://www.amazon.in/Dashavatar-Stories-Vishnu-Piyusha-Vir/dp/9385854860), published by Readomania. View all posts by Piyusha Vir

8 thoughts on “For The Love of Garden”

Telepathic Systems are down at present. Please use below box to communicate. Cancel reply