He stealthily followed the lady in black. Tall, muscular and lithe, he was easily able to keep her in his sight even in the crowded street. The dark night and the milling crowd provided him a perfect camouflage.

She was alone and her demeanor quite carefree. It made her a perfect mark, he smirked. He wondered what she looked like. Her lustrous, wavy hair cascaded down her shapely back, giving her a typically feminine look. Her fitted jeans and tight shirt enticed him further. He licked his lips and quickened his pace. She dropped something on the way, he noted. A crooked smile twisted his already scarred face. It gave him a perfect opening to chat up with her. He languidly picked up the small card.

With its plastic cover, it seemed to be an identification though he couldn’t see it clearly in the dark. Now he would know who she was, he thought satisfactorily. Even better, he would know where she worked. With narrowed eyes, he strained hard to see the name but couldn’t make anything of it. Even the photograph on the card was barely visible. He gripped the card tighter and followed her on. Just up ahead was an overhead streetlamp where he would be able to get to know her better.

As he passed under the street lights, he glanced at the small card.
Layla Dawson. 22, Nelson Street, Lexington.
Name as well as an address – important details that said a lot about the person. His gaze shifted to the picture on the right. With hazel eyes, perfectly aligned teeth and a sharp jaw line, she looked attractive. Probably the prettiest of them all, she may very well be his most beautiful victim till date. This was a bonus! He appreciated beauty. It made the task twice as much fun. Her age wasn’t mentioned, he clucked his tongue disapprovingly. He would have to guess that from her photograph. Must be in her early-twenties, he deduced correctly.

Adrenaline rushed through his veins as he anticipated the events that would unfold. His head felt lighter. It was going to be an eventful night, after all, he chuckled.

He stared at her swaying hips, his mind racing in different directions. Did she know he was following her? It didn’t seem like it. He had to figure out his exit route and his next actions before she spotted him.

He checked for his car keys as his eyes darted around looking for a weapon. He needed a large rock for maximum impact. He should have carried his own, he mused. It was stupid to not be prepared at all times. Stupid and careless. He would also need a sharp edged tool to cut through easily, ensuring least resistance and struggle. That part was important. Struggle would draw attention, something he could very well do without.

He pulled out his key chain. The hidden blade was not razor sharp but it would do for now.

He became aware of his surroundings again and noticed the crowd had thinned. He would have to be more careful, keeping to the shadows between the streetlights. He darted up ahead and hide behind a lamp post. She was quite close now. The moment was fast approaching, he thought wildly. Eyes darting furiously, he looked for a deserted alley to drag her into. 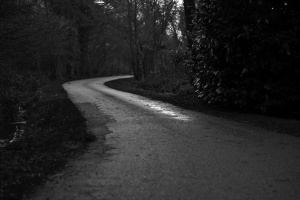 A few moments later presented him with such an opportunity and he lunged at her. The element of surprise was his biggest strength. He kicked at her from behind and locked her arms in. With one hand over her mouth and the other at her neck, he threw her to the ground.

Layla stumbled forward and struggled to regain balance. He rushed forward to pin her to the ground. She felt the rush of air and threw her foot backward, hitting him in the knee. Her elbow connected with his jaw, stunning him momentarily. Those crucial seconds were all she needed. Layla swung around and charged at him. He tried to grab at her hands but she was faster. Her arms now free, she pushed him backward. He almost lost his balance, but was quick to get back on his feet. Layla was already waiting. The moment he raised his head, she used all her might and punched him in the stomach. Her other arm swiped a fisted hand across his face. He experienced intense pain. Before he could recover, another intricate maneuver followed and the next moment he lay flat on his back, with an unrestricted view of the pitch black sky.
She had recognized him already, but there was no looking back now. He may well be her brother’s best friend but she wasn’t going to spare him any mercy, she thought resolutely as her lips pursed together. She kicked him hard, even as she readied for another volley of blows.

“Peace Out!” He cried, writhing and squirming, as he clutched his stomach. Layla raised her hands as a gesture of acceptance and stepped back. A flurry of activity ensued. Lights flashed on, flooding the dark street in swaths of red, blue and yellow. Uniformed men came rushing in and helped him to his feet. Supported by men on both sides, he hobbled to the nearest emergency van. Medical personnel who were on standby came forward with ice-packs and bandages.

He warily watched the proceedings from his half-standing position in the cargo space of a marked SUV. The uniformed men congratulated Layla on her speedy movements and quick thinking. She had bested their swiftest officer, he overheard them say. He grunted with mild annoyance as he gingerly ran a finger along the length of his bandaged nose. Not his best work, he thought ruefully.

A quick preliminary exam, and Layla was cleared by the medics almost immediately. She retraced her steps toward him. He picked up a large envelope and a blue pocket-sized, leather-like folder that lay beside him and resignedly handed it over to the grinning girl.

She opened the letter gleefully and read its contents.
“Passed real life simulated drill exercise and awarded Officer rank,” it announced.
She looked up at him, stuck her tongue out and waved the card at him.
Two blue letters on a white background stood out.

“Yeah … yeah… whatever! You almost broke my nose,” he said, “not forgiving you for that.”