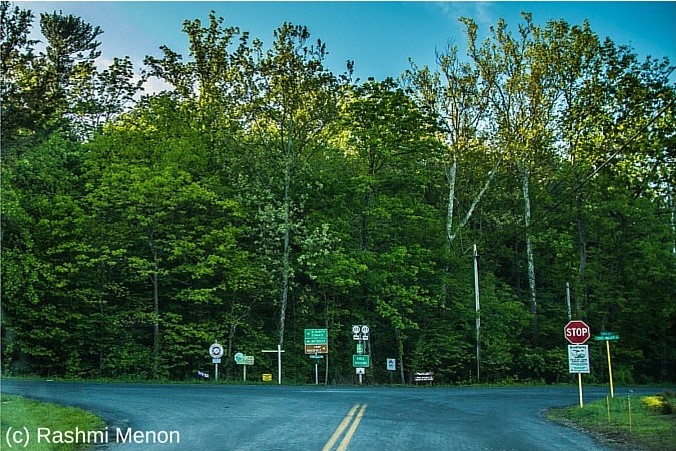 Mark checked his speed-o-meter again. “No? You sure?” He asked her, sticking his tongue out even more.

“Daddy, noooo.” Aisha giggled again. “Still no doggy,” she said, flapping the large ragged doll in her hands for emphasis.

“Okay, No.” He laughed. “What about a horse?” Checking the rear-view mirror, he cautiously overtook the slow trailer in front of him. She watched as they sped past the trailer. She stood on her knees and looked at it through the rear windscreen as it got smaller and smaller, finally disappearing completely.

She turned back to face her father.

Aisha sat back in her seat. “A horse?” She grinned, showing her missing front tooth. “I don’t know.”

“What? How can you not know? C’mon, Aaron is always making that sound.”

“Wheeeeeee.” Aisha imitated her brother, her two pigtails flying wildly as she shook her head side-to-side like a horse.

Mark grinned and checked the rear-view mirror again. The road behind them was empty, he noted.

“Okay, now look here,” he said, pointing to a sign looming up on their right. “You know what that is?”

Aisha leaned forward from her seat, peering at the sign. “No,” she said, crinkling her nose and sat back.

“That’s a Stop sign,” he said, flicking on the left indicator. “Whenever you see that sign, you must stop, look both ways and move ahead only if you get a clear passage.”

“Stop and look both ways,” Aisha repeated carefully. She leaned forward towards her father and said brightly, “Just like a Zebra crossing, no Daddy?”

“Yes, exactly like a Zebra crossing. Very good, Princess,” Mark said affectionately. His gaze switched again from the rear-view mirror to the road ahead. He slowly changed lanes to prepare for turning that approached ahead.

Aisha settled back into her seat. Her favourite song came on the radio and Aisha hummed along.
“Watch me, nay …” She tried twisting the doll’s plaited hair into a French knot, but somehow just couldn’t get it right. Try as she might, she couldn’t remember how Mommy used to make hers.

Aisha looked at her father, now. Best daddy in the world, she thought. Just like Mommy had been the best mommy before she went away. Aaron, her elder brother, was stupid, though. He was always running around and constantly pulling her hair. He was two years older than her and bossed her around like no one else. Daddy always took her side, though.

“Watch me…,” she hummed again in sync with the music.

Mark checked the road on his right before making a slow left turn. He gently eased the car into the road while constantly checking the oncoming traffic from his right.

Suddenly, her father shouted at her. Aisha looked up in alarm. Before she could understand anything, he shouted again. She heard a loud roar of a car engine followed by an equally loud screeching noise. She started to look back but her father screamed again, this time, louder than ever.

Aisha dived behind the front seat. She sat quietly, crouching between the front and back seats. Daddy had just shouted at her. He never used to shout at her. She wondered what was happening.
Maybe he was playing that horrible game again. She hated that game. She felt scared and lonely. But Daddy insisted on playing it. Even Aaron had to play with them. But Aaron wasn’t here right now. He was at his friend’s birthday party. Alone, she felt even more lonely and scared.
It was a weird game. Daddy would shout at her and she would hide under a couch or a table. She was to stay there until Daddy came to fetch her. Sometimes Aaron would come looking for her. He would tease her and make fun of her if he found her crying. She liked it when Daddy came. Unlike Aaron, he never laughed at her. Instead, he would hold her in his arms and whisper, ‘My beautiful princess.’ He would stroke her hair or kiss her softly. Sometimes he would place her on his lap and rub her back. Often he would tickle her below the ear and made her laugh. If she was crying, he would say, “Shh…You’re safe now.” She would find that comforting. It would instantly make her feel better.

An instant later Aisha heard a loud crash and felt their car jerk forward. She closed her eyes and covered her ears. Something had hit them hard. Their car shot forward a few metres, then spun on the road like a merry-go-round. She hated merry-go-rounds. They made her dizzy. The car careered off the road and teetered from side-to-side like a roller coaster. She hated roller coasters too. They were scary. Finally, the car wobbled for one final time before it rolled to a stop.

She waited for Daddy to come to her. He’d get her out. He always came. He’d come now too, she knew. She’d just wait patiently, without crying. She’d show Aaron she wasn’t a cry baby.

She heard shouts and the sound of people running and then it was silent again. Aisha waited and waited. Daddy had told her to never move until he came for her. So, she sat there and waited. He’d come, she knew. Daddy often said she was his brave princess. She’d prove him right. She would be brave. After all, she had to show Aaron.

Aisha waited quietly. Even though the silence scared her. Even though her favourite song wasn’t playing anymore. She felt like crying. She hugged herself and whispered, “shh… beautiful princess.” She kissed her hand like Daddy would. She felt pain in her hands. Her shoulders started hurting. “Daddy, it hurts,” she whimpered. She wiped away the single tear. She was scared but she refused to cry. Daddy would come, she knew. And Daddy would make it better. More tears flowed. She wiped them away again but they wouldn’t stop. She closed her eyes again. It was better that way.

After a while, she heard the sirens from afar. She listened, as they got louder and louder. It sounded like that toy car Aaron often raced around with. But that car also flashed blue and red light. There was no blue and red light here. Or maybe there was, she just couldn’t see it. Aisha opened her eyes slowly and lifted her head. There was shattered glass strewn all around the car seat where she had been sitting. Her doll had slipped out of her hand. Aisha slowly reached out to pick it up.

She leaned forward and grabbed her doll. She turned to look at Daddy in the front seat. He was watching her silently. Aisha retreated to her crouching position. The space between the front seat and the back seat wasn’t comfortable. Her legs were starting to hurt. But she didn’t want to upset Daddy. He already looked angry. His eyes were red and he was staring at her. She would stay there until Daddy came for her. But why wasn’t he getting out of the car? Had he forgotten she was sitting there? Was he testing her like always? She’d wait patiently, she decided. This time, she would be brave.

Finally, she heard a car door slam. She heard footsteps of someone running towards her. Daddy was finally coming for her. He hadn’t forgotten her. She looked up when the door on her side jerked open. It wasn’t Daddy, but instead some man in a blue uniform. “Kid in the back,” he shouted to someone. She blinked back a fresh wave of tears.

The man looked at a tearful Aisha and spoke gently. “Little girl, are you alright?”

Aisha looked up at him. He wasn’t laughing. He was nice. She nodded. Where was Daddy? why hadn’t he come? Was he not coming for her at all?

Aisha nodded again, despite the newest flood of silent tears.

The man reached in and gathered her up in his big, strong arms and lifted her up gently. “Shhh… You’re safe now.”
As the man lifted her up and out of the car, she got a good look at Daddy. He was still looking down where she had been hiding. There was a big gash on his forehead. She tried to look at Daddy again, but Big Aaron covered her eyes and turned her face away as he carried her away quickly.

A few minutes later, she stood on the side of the road holding Big Aaron’s hand and watched as they lifted Daddy into a big van marked Ambulance. He was covered in a plain white sheet. It looked like he was going where Mommy had gone.

Aisha tugged at Big Aaron’s hand. “Will you tell my brother I didn’t cry?”

Photo Credits – Rashmi Menon. Reuse without prior permission is prohibited.