At a Women Writers’ Fest sometime earlier this year, I met this wonderful author and award-winning writer – Kiran Manral – who I admire greatly but had only interacted with on Facebook. Kiran published her first book, The Reluctant Detective, in 2011. Since then, she has published eight books across genres till date, out which I have (unfortunately!) read only one –  All Aboard, which is a breezy fun romance novel that I really enjoyed.

Obviously, I was looking for a chance to get her to share some writing tips with me. When I met her at the day-long festival, I had hoped for a chance to interact with her more personally. But unfortunately, the opportunity did not present itself.

I guess it was only because I’d later have the honour of hosting her on my blog. And when it comes to inviting an author like her, you don’t decide the topic, but instead, give her a free hand to choose one of her own liking. It’s my immense luck that she chose to take on a question that plagues all writers (or, quite a few, at least!)

So, over to Kiran, to talk about ‘Writer’s Block‘ –

One of the things that I’m often asked when answering questionnaires relating to writing is “How do you deal with writers’ block?” My standard response to that has been that if you are a professional writer, you just cannot allow yourself to wallow in the comforting inertia of a writers’ block. But having said that, and harshly so, I do understand that there are times when the words just don’t flow, and you’re stuck for an hour, a day, a week, a month and sometimes, writing then doesn’t come back.

That is actually the nub of what terrifies me. If I don’t write for a day will the words get annoyed with me and stop coming to me at all. Will they dry up forever? What does it take for the words to become choked within me?

So here’s what I would advise everyone stuck with a writers’ block and looking for ways and means to get the words flowing again.

To begin with, do take a break by all means. Distract yourself. Read something for an hour. Paint. Listen to music. Chat with a friend. Trawl the internet. After an hour, get right back to your writing and get on with it. Don’t allow the block to take control.

Write. Keep writing. You can always revise later, edit later, delete and rewrite later. It is important to keep the words coming.

Meditate if you can. A 30 minute spot of meditation can sometimes clear up your writing sinuses and get the words flowing again smoothly.

Physical exercise is another great way to get the writing block tackled. Many famous writers swore by their daily walks, some writers even train professionally and take their work outs rather serious. Haruki Murakami ran marathons and wrote a rather wonderful book titled What I Talk About When I Talk About Running. Physical exercise does do something unclog the writers’ block that afflicts one when one is sitting for hours in one place, working one’s fingers to the bone.

And finally, and perhaps most importantly –

Thank you, Kiran. That is sound advice that I am sure would prove useful to all writers. 🙂

The reader is left to keep guessing till the very last page!

In a dysfunctional marriage, it may seem convenient when the wife commits suicide, but things aren’t always what they seem…

Battling both a fractured marriage and the monsters in her cranium, Aisha leads a sequestered life on the outskirts of a bustling tourist town in the hills of North India. She struggles to stay functional, and tries to wean herself off the pills that keep her from tipping over the edge. Prithvi, the husband she loved once, seems as eager to be rid of her, as she is to flee from him. Only her children keep her tethered to her hearth. One rainy afternoon, the last thing Aisha expects to see is a younger version of herself at the door. It is Aisha’s half sister, Heer, her father’s illegitimate daughter from another woman. Despite her misgivings, Aisha lets her into the house, and she stays over. Two days later, Aisha goes into town and never returns. Seemingly unperturbed, Heer slips into her missing sister’s shoes effortlessly, taking charge of the house, the kids, and even Prithvi, who responds to her overtures willingly.

A note found in Aisha’s wallet states that she has taken her own life, though strange happenings leave plenty of room for doubt. But, if she is not dead, where is Aisha? Is she really dead? Did she commit suicide as the note found in her wallet states? Has she been abducted, run away or in hiding? Why does Prithvi not grieve for his deceased wife? And why does Heer walk out of the house one fine day, leaving no forwarding address?

As it examines the destruction a dystopian marriage and mental illness leave in their wake, Missing, Presumed Dead brings us face to face with the fragility of relationships, the ugly truths about love and death, and the horrifying loss of everything we hold dear, including ourselves.

A TEDx speaker, columnist, mentor with Vital Voices Global Mentoring Walk 2017 and festival curator, Kiran Manral published her first book, The Reluctant Detective, in 2011. Since then, she has published eight books across genres till date. 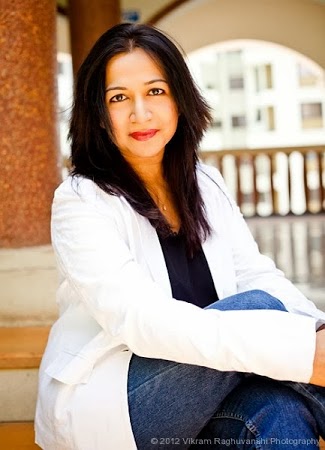 Her books include romance and chicklit with Once Upon A Crush, All Aboard, Saving Maya; horror with The Face at the Window and nonfiction with Karmic Kids, A Boy’s Guide to Growing Up and True Love Stories. Her short stories have been published on Juggernaut, in magazines like Verve and Cosmopolitan, and have been part of anthologies like Chicken Soup for the Soul, Have a Safe Journey and Boo.

She was shortlisted for the Femina Women Awards 2017 for Literary Contribution. The Indian Council of UN Relations (ICUNR) supported by the Ministry for Women and Child Development, Government of India, awarded her the International Women’s Day Award 2018 for excellence in the field of writing. Her novella, Saving Maya, was long listed for the Saboteur Awards 2018, UK, supported by the Arts Council England. Two of her books, The Face at the Window and Missing, Presumed Dead, were long listed for the JIO MAMI Word to Screen.

Her latest book Missing, Presumed Dead, can be ordered on Amazon here.