After two weeks of being a couch potato and idle lazing around, I finally decided to turn around and make use of this so called “break” to follow my long lost loves. And the first step in that direction was discipline. So, just as I was drifting off to sleep last night, I decided to follow a morning routine, just as I would, had I been at office. Make a cup of coffee and sit down at my make-shift “work table” and read a few articles, browse a few blogs and then if inspiration struck attempt to write something of my own.

The first thoughts would most certainly have been of regret – and that’s what I had initially decided to write about, as part of the one-word inspiration assignment on my Writing101 course. Regret  – my life is full of it, and I wouldn’t have much trouble filling up reams and reams about it.

Just as I was deciding how to set my work table, my thoughts drifted to my morning beverage. Coffee, I had decided earlier on. Now I wasn’t so sure whether it should be that or to go in for my usual drink – Tea. Afterall, we are so famously a tea-drinking nation. Also, tea is for that single, old lady sitting by the window side, stroking their cat while reminiscing about their charming beauty back in the day and their solitude because of lost opportunities. That was a future version of me. And if was Tea that I would prefer, then why not Green Tea – the healthier version. “Urghh, Choices… choices.. choices!” I muttered. And lo and behold, I already had my article in place. The bulb was lit. The hammer had struck.

So, that’s when I relegated the dark, depressing “Regret” to another day and decided to write about Choices instead. Because, isn’t that the bane of our existence. The choices we make lead us to live our lives the way we do. 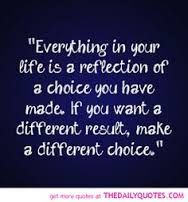 A budding painter chooses to pursue Engineering over Art. A young bride chooses to resign herself to domesticity and gives up her promising career. All our lives, the choices we make define us, take us to different paths. The reasons are always different. “Engineering is the “in” thing.” or “I can’t dissapoint my parents.” or even the banal “What will the world say.”  Sometimes, those choices may turn out just right. Sometimes, we make the wrong ones and realize it soon enough. Sometimes, we live with the burden of our choices only to regret it all our lives. 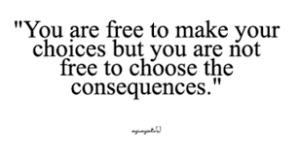