The month-long Readomania Crime Writing Festival that’s on in full swing on Twitter is as informative and exciting as a virtual writing festival can be. Every Tuesday and Thursday, an author takes the viewers and readers through the various aspects of crime and thriller writing. Along with the discussions, there is also an ongoing contest on the best ‘original short crime fiction’, the winner of which will receive an ebook publishing deal with their digital imprint, ReadoShots. There will also be book giveaways to the best question asked twice every week.

This Thursday was the seventh session of the festival and debut author of Who Stole My Memories, Maitrayee Sanyal De, shared her tips and tricks for Creating Memorable Characters In Thrillers.

In a thriller, characters should have different shades – good and bad, pretty and ugly, she said. We are interested in a character and wants to know more if they see different shades and come across as like us. We want to know their story, how things progress in their lives, and how the story ends.

She deconstructed the character of Musa – a villainous character in her book – and explained why it is her favourite character. It is not a stereotypical caricature of a villain as it is in Hindi films and serials, who have no reason to be the way they are. Every villain has a certain backstory that drive their motivations – an action that has a reaction.

It makes the character believable and enables the reader to identify with Musa to the extent that it enables them to justify his actions. As the character evolves, he displays behaviour that is not typically expected of him, she said.

She invited viewers to share their memorable characters in fiction and what makes them memorable. Bhuvana Shankar shared her favourite character is Heathcliff from Wuthering Heights.

Her writing quirk, Maitrayee said in response to a viewer question, is taking on the character’s role as she writes.

In her guest post, she spoke about how to describe characters without comprising on the flow of the plot.

‘You cannot go into lengthy monologues or detailed descriptions of physical appearances without sacrificing the tempo of the story. Instead, the characters need to be described in motion, in the way they speak or the way they react to situations. Another interesting element could be in tiny details like a row of gold teeth or a signature laugh to make a villain a bit more sinister. The idea is to just give an idea, not paint the entire picture. The joy of reading a book, especially thrillers, is to fill in the gaps with our imaginations.’

Giving the example of characters from Hindi serials, she explained how the characters came across as flat and what could be done to make them rounded characters.

It is important to present the story through realistic characteristics like a helicopter boss. ‘I had met a humble grocery shop owner in Johannesburg who was my inspiration behind “Hussain”, she writes in the guest post, while explaining how real-life people can be cast as fictional characters. 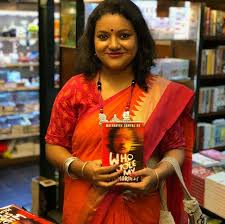 Maitrayee took several questions from the viewers and explained each nuance patiently. The session was quite interactive and fun.

To wrap the session up, she gave another nugget of valuable advice that could make the characters more realistic and relatable. ‘

Grab your copy of Who Stole My Memories here.