I have a childhood connection to cycling. It’s not something I consider to be just a sport. It’s a reward. It’s not exercise, it’s fun. And, now as an adult, every time someone mentions cycling, it brings back some very fond memories of my childhood.

My affair with cycling began in the fourth standard when after topping the Math exam, I was rewarded with a bicycle. It was love at first ride. The red gleaming body, the sleek handlebars, the eight-tune bell – from a screaming police siren to the melodious tune of a bird’s chirping – which I would ring endlessly, the gigantic wheels, and that seat which, to me, was no less than a throne. I often spent many long hours in its company – riding it, humming songs to it, narrating the events at school, imagining quite a few stories in my head too.

When I got to know about this book about a cycling expedition to Kailash Manasarovar, that too from a cycle’s perspective, I knew right away that I just had to read it. In all my conversations with my cycle, its responses had always been ones which I imagined and credited to it. Now I’d finally get to know what a cycle would say if it could speak.

And so, with much thrill and expectations, I picked up the book Kailash Mansarovar, published by Readomania. 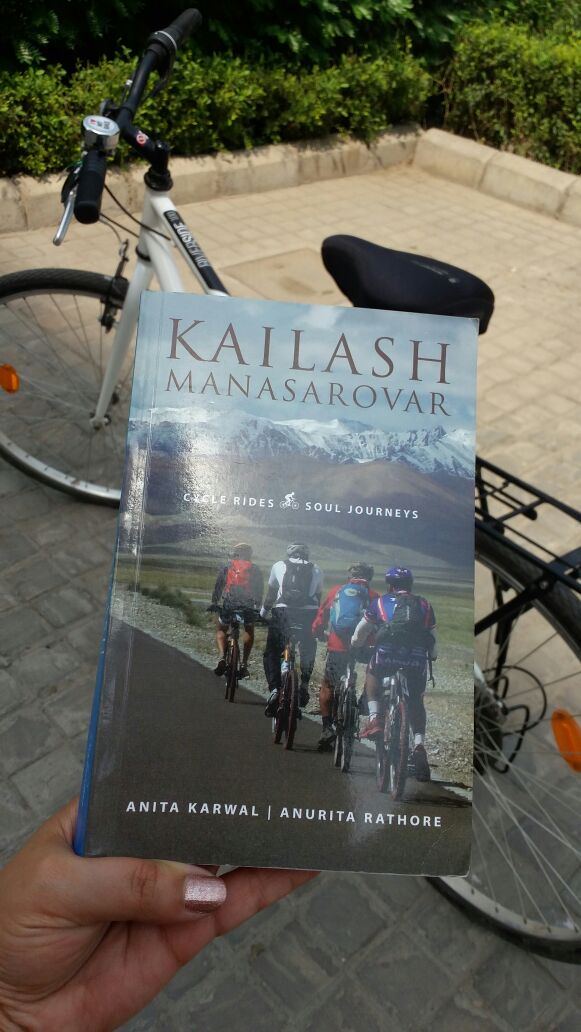 The book starts with a route map of the cycling route. A name list of characters is also included, that makes it an easy reference guide with so many people in the book. This was an interesting introduction to the group and the journey they were to undertake, I thought. What I didn’t know is that not once would I have the need to refer to these resources. (More on that later)

With the cycle telling you the story, it makes for an engaging and unique read. The narrative switches between doling out philosophical wisdom that alternately either makes one smile or ponder and presenting an eye-witness account with such humour that one would end up laughing out loud. Despite the heavy doses of philosophy, the book doesn’t take on a preachy tone.

In fact, the smart presentation of life’s truths using the cycle’s perspective is done so intelligently that it does not seem overdone. Instead, coming from the cycle such advice is easier to reflect upon, so much so that it would have you either nodding in agreement or raising your eyebrows in revelation. I often found myself chuckling out loud at the humour too.

The best memories are made when you keep the camera aside.

After settling down, they met at 05:30 Gaurav time.

The human mind is one of the greatest mysteries of civilisation.

So a cycle here is equivalent to a female kangaroo.

Forgetfulness is the key to nurturing a larger and calmer perspective of life.

I liked how the book is not just an eye-witness account of the cycling expedition but so much more than that. It delves into Tibetan history and culture through many poems, quotes, local legends and tales. The Zen Koans were also an interesting addition to the narrative.

What I also loved were exquisite pictures and the poems written by the authors that captured the true essence of the journey. The schedule and the glossary at the end of the book further add to the experience of the journey and understanding of the myths respectively.

There’s also a new word from a foreign language that is introduced at the beginning of each chapter and ties to the contents of that chapter in a very interesting and intriguing way. I thoroughly enjoyed learning the new words in reference to the story.

With so much information packed in one book, it could easily have gone wrong and even seemed overdone but the presentation of it all is such that it works brilliantly. So full credit to the team for that.

The best part, for me, was the way the book is written. The inter-tent conversations, the negotiations with the drivers, the easy banter during breaks, the magnificent views that have been described, and even the philosophical at times practical wisdom that undertaking such a journey exposes one to, were all immensely enjoyable. Reading this book was like living the experiences with the group as if I had been there in person at each moment and spent time in the pristine surroundings just like the fourteen of them. Many of the incidents narrated had me reminiscing about my cycling experiences – how I would race my friends, or how we would complain of aching limbs after a particularly strenuous hour of cycling.

The route and the itinerary they followed is described so well, that the reader knows exactly what they are doing on any particular day. That’s the reason I didn’t have to refer to the map at the beginning even once.

As for the list of characters in the book, I had initially thought I’d have to look back upon it frequently to keep track of who’s who but the narrative is such that you get to know them gradually, just as you do when you become friends with someone in real life. The many anecdotes and the narrative would make you feel as if you’ve developed a personal connection with each of them, whether it be the Support group or the cyclists. I now feel like I have personally known them for long. Kuldeep’s photography, Satpal’s daredevilry, Anurita’s journalistic wisdom, Gaurav’s punctuality, Harsh’s able leadership have already earned a fan in me.

I’ve never been to Kailash-Manasarovar. But it feels like I’ve just returned from a very demanding and rewarding expedition to the famed Mount Kailash.

To the authors, Anita Karwal and Anurita Rathore, the editor, Indrani Ganguly, and Readomania, thank you for taking me on this trip with you. As the last line in the book says, ‘it has been quite a journey.’