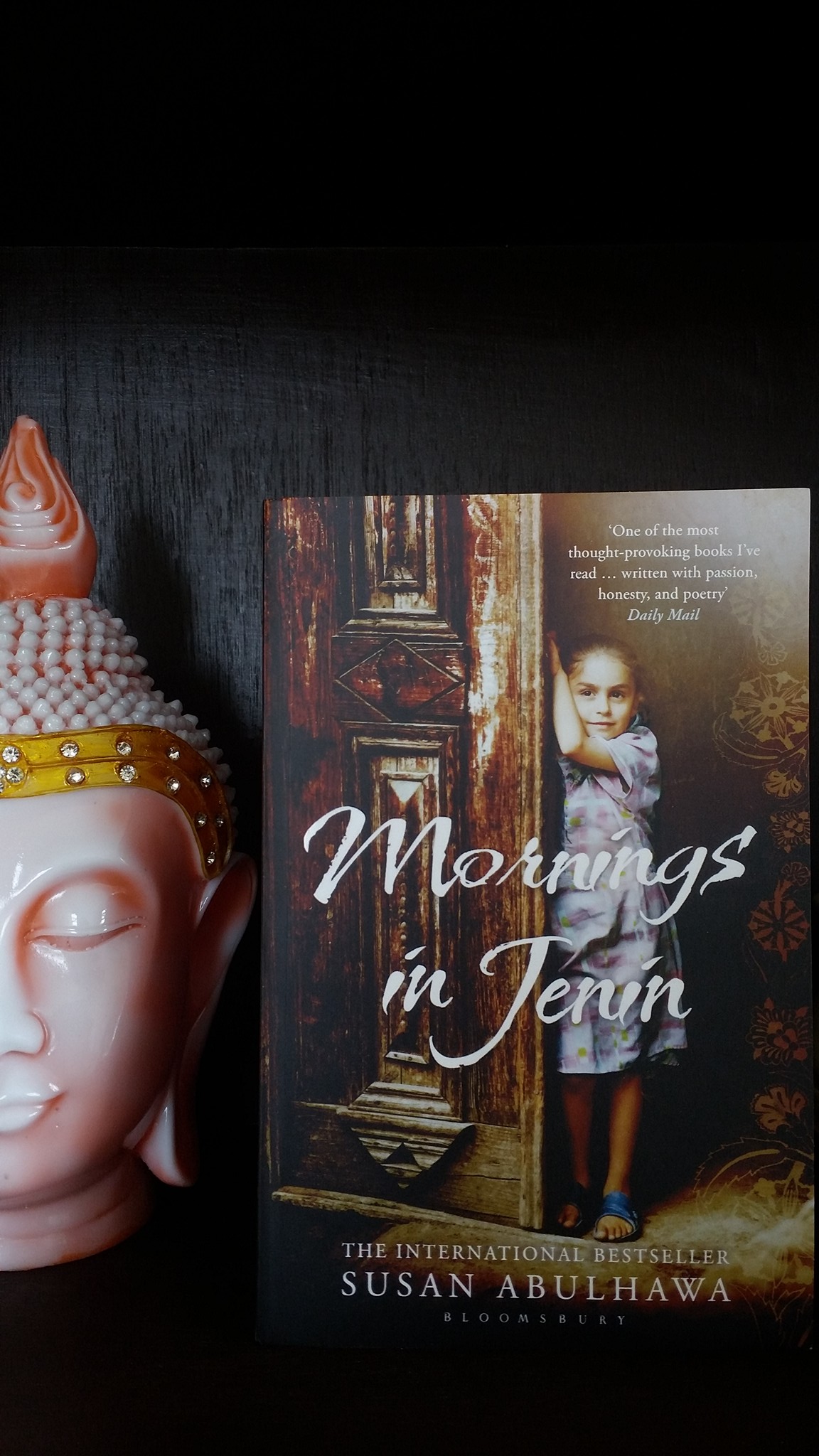 I received the book Mornings in Jenin by Susan Abulhawa (along with another book by the same author- The Blue Between Sky and Water) as a birthday gift from Kirthi Jayakumar, author of The Doodler of Dimashq. Because I had loved The Doodler of Dimashq, Kirthi thought I may enjoy this book too.

Thank you, Kirthi, for this wonderful gift. I am so glad I got to read this tragic yet beautiful book.

Forcibly removed from the ancient village of Ein Hod by the newly formed state of Israel in 1948, the Abulhejas are moved into the Jenin refugee camp. There, exiled from his beloved olive groves, the family patriarch languishes of a broken heart, his eldest son fathers a family and falls victim to an Israeli bullet, and his grandchildren struggle against tragedy toward freedom, peace, and home. This is the Palestinian story, told as never before, through four generations of a single family.

The very precariousness of existence in the camps quickens life itself. Amal, the patriarch’s bright granddaughter, feels this with certainty when she discovers the joys of young friendship and first love and especially when she loses her adored father, who read to her daily as a young girl in the quiet of the early dawn. Through Amal we get the stories of her twin brothers, one who is kidnapped by an Israeli soldier and raised Jewish; the other who sacrifices everything for the Palestinian cause. Amal’s own dramatic story threads between the major Palestinian-Israeli clashes of three decades; it is one of love and loss, of childhood, marriage, and parenthood, and finally of the need to share her history with her daughter, to preserve the greatest love she has.

Previously published in a hardcover edition with a limited run under the title The Scar of David, this powerful novel is now available in a fully revised, newly titled paperback edition. The deep and moving humanity of Mornings in Jenin forces us to take a fresh look at one of the defining political conflicts of our lifetimes.

Thanks to my WhatsApp chats with her, I had some understanding of reading it would entail and I had braced myself for it. (And yet, as I realized later, I was quite unprepared.)

I dug into the book, and expecting it to be the tear-jerker I knew it to be, had steeled my heart.

The story opens with a gripping scene unfolding in the present moment and then goes into the flashback to narrate the past. Initially, it was a pleasant blissful read, especially with the cheerful introductions of the close-knit family of Yehya Abulheja.

And while the dark revelations slowly came forth, the book was still gentle and languid in the tone – gently revealing the nuances of life in conservative (read oppressively conventional) upbringing through Dalia’s carefree childhood; later of the atrocities through Dalia’s adulthood. That a woman’s honour is protected is the only concern and one mustn’t mingle with the boys comes out with great emphasis through subtle hints and painful incidents.

The scene where Darweesh tells Dalia that she can ride the horse and he would walk in front and not turn around to look at her brought a smile to my face. The innocence and respect for the conventional traditions stand out. But I was soon jolted out of the idyllic bliss I was experiencing at a wild child-like existence lived vicariously through Dalia; the very next page shattered my notions of this being a breezy comfortable read and set the pace for the rest of the book.

Some samples from the book that made my heart bleed –

‘Had she screamed, perhaps the fire would not have reached so deeply into her. ‘

‘The same men who had received the offering of food now marched through, pointing guns at the people who fed them.’

And yet, I remained unaffected. Because I had been forewarned, I didn’t cry. I steeled my heart and remained detached. I was proud of not letting myself get caught up in the fictional world that existed within the pages of this book. I didn’t shed a tear through more than three-fourths of the book. Death, destruction, loss – I remained untouched by it all. Until this one sentence broke all defenses and ripped me apart.

And then the tears just wouldn’t stop. A seemingly innocuous sentence but which shredded my resolve and broke through any attempts of detachment. Because then the dam broke. I had to reach out to Kirthi instantly. Despite her efforts, it took me some time to calm down and resume reading again.

And as I did, a line from the book exclaimed exactly what I had experienced.

‘Healing and peace can begin only with acknowledgment of wrongs committed.’

After reading both the books, I am pretty shaken up. And, just like the news anchor in a recent video that’s gone viral says, pretty ashamed too.
I’ve not been able to shake off the feeling of being a hypocrite either. If you’ve not read either of the books, would recommend you to pick them up now.

I now look forward to reading the other book by Susan Abulhawa (after I’ve recovered a bit) – The Blue Between Sky and Water.